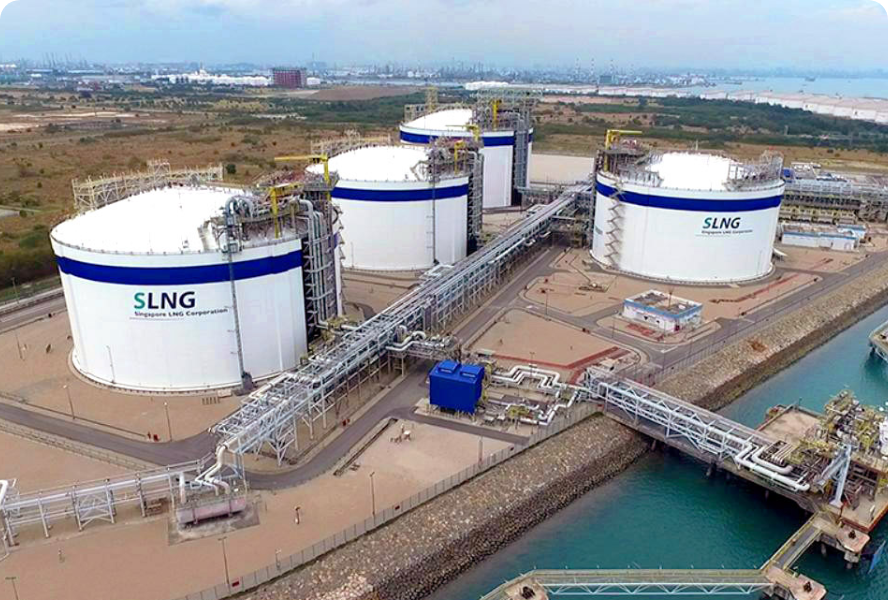 Singapore’s first liquefied natural gas (LNG) terminal will further enhance Singapore’s energy security as it offers geographical diversification of LNG imports, making us less susceptible to price and supply risks. The LNG terminal which will allow Singapore to import gas from countries all over the world will also help to supplement our rising energy demand when it comes on-stream in 2013. As a fuel source, LNG will play an important role in helping to address Singapore’s energy challenges of energy security, economic competitiveness and environmental sustainability.

Good progress made with construction of three tanks and jetties underway

Located on Jurong Island, the LNG terminal is about 80 per cent complete. The LNG terminal’s good progress was shared by Mr Neil McGregor, Chief Executive Officer of Singapore LNG Corporation Pte Ltd (SLNG) during a visit to the terminal’s 30-hectare site by Mr S Iswaran, Minister in the Prime Minister’s Office and Second Minister for Home Affairs and Trade & Industry. Mr McGregor added that since the terminal’s groundbreaking in March 2010, construction of key installations including the first two LNG storage tanks and the primary jetty are well underway.

The LNG terminal will have a throughput capacity of 3.5 million tonnes per annum (Mtpa) when it is operational in the second quarter of 2013. This capacity will increase to 6 Mtpa by the end of 2013 when additional jetties and regasification facilities are completed. The terminal’s third tank is targeted for completion by the first quarter of 2014. Each tank which is 53-metre high, can hold 180,000 cubic metres of LNG, big enough to fit three Boeing 747 aircraft stacked on top of one another. (Please refer to Annex A for more interesting facts and figures about the LNG terminal.)

The current LNG aggregator for Singapore, BG Singapore Gas Marketing has sold about 2.65 Mtpa of LNG and is expected to reach 3 Mtpa by 2013. As BG has an exclusive licence to import LNG and sell regasified LNG in Singapore for up to 3 Mtpa of LNG or until the year 2023, whichever is earlier, a study is underway to explore several possible frameworks for future importation of LNG once BG’s contract ends.

To this, Mr Iswaran announced at the visit that the Energy Market Authority will be issuing a post-3Mtpa LNG import consultation paper to gather industry and public feedback in March 2012. Noting that the needs of consumers and the LNG terminal’s efficiency are key considerations for the framework, Mr Iswaran stressed that the eventual framework should allow Singapore to continue to access competitively-priced and reliable supplies of LNG.

When completed, the LNG terminal will contribute to the development of Singapore as a regional gas hub and is expected to create new job opportunities for Singaporeans in a significant and rapidly growing industry. (Please refer to Annex B for background to LNG in Singapore.)

About Ministry of Trade and Industry (MTI)

The Ministry of Trade and Industry seeks to promote economic growth and create jobs through the development of industry sectors and international trade interests. Our strategies are derived from Singapore’s general philosophy of economic management: strong adherence to a free market economic system and active pursuit of outward-oriented economic policies. For more information on the ministry, please visit www.mti.gov.sg.

About the Energy Market Authority (EMA)

The Energy Market Authority (EMA) is a statutory board under the Ministry of Trade and Industry. Our main goals are to ensure a reliable and secure energy supply, promote effective competition in the energy market, and develop a dynamic energy sector in Singapore. Through our work, we seek to forge a progressive energy landscape for sustained growth. Please visit our website www.ema.gov.sg for more information.

Singapore LNG Corporation Pte. Ltd. is a company incorporated by the Energy Market Authority to own and develop Singapore’s first LNG import terminal. For more information on SLNG, please visit its website at www.slng.com.sg

Background of LNG in Singapore - Chronology of Events

On 4 September 2007, Mr S. Iswaran, then Minister of State for Trade and Industry, announced that the Energy Market Authority (EMA) would call a Request for Proposal (RFP) for interested parties to participate in the selection process as an LNG Aggregator. Interested parties were invited by EMA to submit their business concepts for the Aggregator role. PowerGas Ltd (PowerGas), a wholly-owned subsidiary of Singapore Power Limited, was then designated as the LNG terminal owner and operator.

On 30 June 2009, Mr S Iswaran, then Senior Minister of State for Trade & Industry and Education announced that the Government would take over the development and ownership of the Singapore LNG terminal, as it was difficult to proceed with the project on a commercial basis. EMA subsequently formed a new company, Singapore LNG Corporation Pte Ltd (SLNG), to own the terminal and oversee its development.

On 21 January 2011, SLNG announced the award of the contract for the EPC of the third LNG storage tank to Samsung. The third 180,000 cubic metre LNG tank, in addition to the two similar sized tanks that are being built, will increase the terminal’s storage capacity to handle up to 6 Mtpa of throughput. This addition gives Singapore greater flexibility not just to meet its future gas needs, but also to pursue new business opportunities in the LNG market.

On 4 August 2011, the SLNG announced the award of the EPC contract for the Secondary Berth Project to Samsung. The project, which forms part of the S$1.7 billion overall Singapore LNG terminal project cost, comprises a secondary jetty designed to berth LNG ships with a cargo capacity ranging from 60,000 to 265,000 cubic metres (m3), and a tertiary jetty marine sub-structure designed for the future berthing of smaller LNG ships and barges with cargo capacity ranging from 10,000 to 40,000 m3. The Secondary Berth Project will give added flexibility and value to the range of LNG terminal services that SLNG can offer its customers in Singapore and regionally.