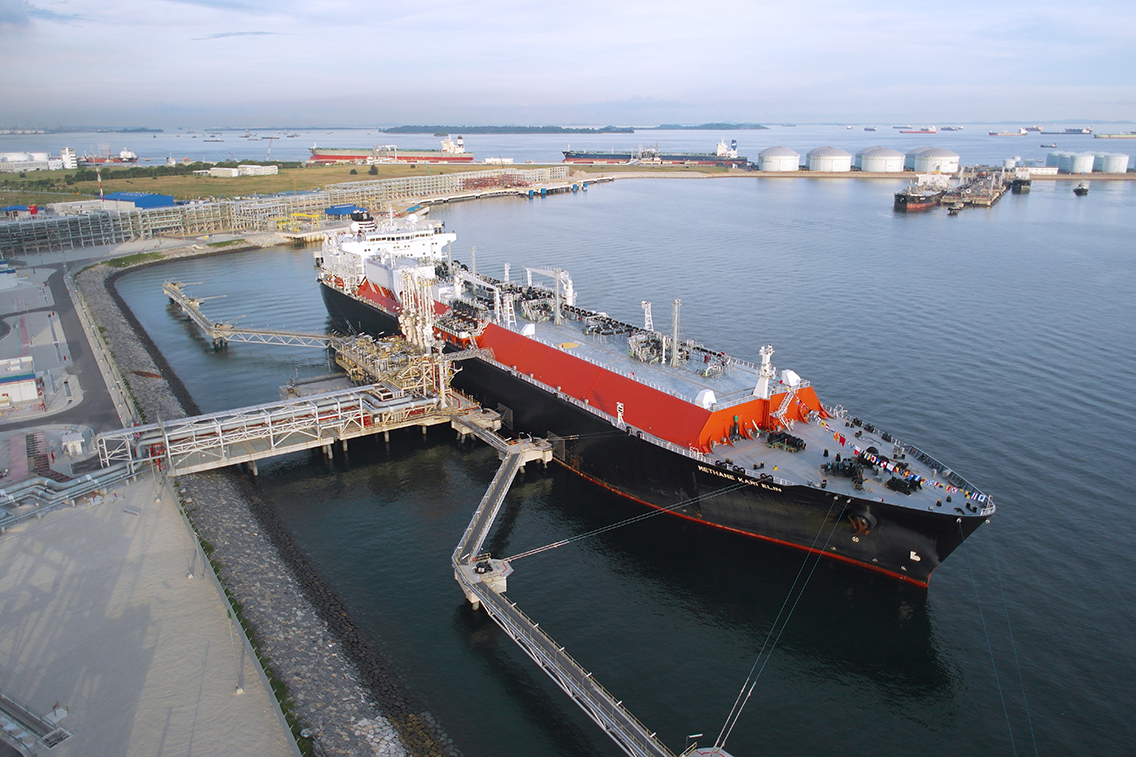 The LNG Terminal is a key infrastructure that supports Singapore’s energy diversification strategy. It allows the nation to import natural gas from around the world, thus enhancing its energy security and meeting future energy demand. The decision to build the Terminal on Jurong Island was made in 2006. Construction of the S$1.7b terminal began in 2010, and the first two tanks with regasification facilities are now completed on schedule and within budget. The Terminal will enable Singapore to access competitively priced gas globally, bringing benefits to consumers and unlocking opportunities for businesses.

After witnessing the arrival of the first commercial cargo at the Terminal, Mr S Iswaran, Minister in the Prime Minister’s Office and Second Minister for Home Affairs and Trade & Industry, said, “Energy diversification is an important part of Singapore’s strategy for energy security and resilience. The LNG terminal is a key infrastructure to achieve this objective. It will also contribute to the development of Singapore as a regional gas hub, catalyse LNG-related business opportunities and create new job opportunities for Singaporeans.”

Mr Neil McGregor, Chief Executive of Singapore LNG Corporation Pte Ltd (SLNG), the LNG Terminal operator, said, “SLNG is proud to have been able to deliver to its commitment on this nationally significant project. I would like to take this opportunity to thank Samsung C&T, who has been a wonderful partner. Not only were we able to complete this mega-infrastructure on time to start operations as planned, we did it while maintaining a world-class safety record, having achieved some 14 million man-hours of work on site without any lost-time injury. We look forward to serving our customers and the nation in time to come as Singapore grows to become a gas hub for the region.”

The LNG terminal will have an initial throughput capacity of 3.5 million tonnes per annum (Mtpa) with two tanks. This capacity will increase to 6 Mtpa by the end of 2013 when the third tank, additional jetties and regasification facilities are completed. Plans were announced in October 2012 for a fourth tank and associated regasification facilities to be added to the terminal, to raise its throughput capacity to 9 Mtpa.

The LNG cargo was delivered by BG Group, which was awarded an LNG importer’s licence to import and sell up to 3 Mtpa of LNG. So far, BG has sold about 2.7 Mtpa of LNG.

The Energy Market Authority of Singapore (EMA) has concluded the first round of industry consultation on the post-3 Mtpa LNG import framework. Taking into consideration the industry feedback, EMA will launch a second round of consultation later this month.

About Ministry of Trade and Industry (MTI)

The Ministry of Trade and Industry seeks to promote economic growth and create jobs through the development of industry sectors and international trade interests. Our strategies are derived from Singapore’s general philosophy of economic management: strong adherence to a free market economic system and active pursuit of outward-oriented economic policies. For more information on the ministry, please visit www.mti.gov.sg.

About the Energy Market Authority (EMA)

The Energy Market Authority (EMA) is a statutory board under the Ministry of Trade and Industry. Our main goals are to ensure a reliable and secure energy supply, promote effective competition in the energy market, and develop a dynamic energy sector in Singapore. Through our work, we seek to forge a progressive energy landscape for sustained growth. Please visit our website www.ema.gov.sg for more information.

Singapore LNG Corporation Pte Ltd (SLNG) was incorporated by the Energy Market Authority in June 2009 to develop, build, own and operate Singapore’s first LNG (Liquefied Natural Gas) Terminal on Jurong Island. Upon commencing commercial operations, SLNG’s core business will include LNG terminalling, storage, throughput, reloading and vessel cool down services. Beyond these, SLNG will continuously explore new LNG business opportunities as it pursues its vision to become the Gateway for LNG in Asia, and establish Singapore as the LNG Hub for the region. For more information, please visit www.slng.com.sg

On 4 September 2007, Mr S. Iswaran, then Minister of State for Trade and Industry, announced that the Energy Market Authority (EMA) would call a Request for Proposal (RFP) for interested parties to participate in the selection process as an LNG Aggregator. Interested parties were invited by EMA to submit their business concepts for the Aggregator role. PowerGas Ltd (PowerGas), a wholly-owned subsidiary of Singapore Power Limited, was then designated as the LNG terminal owner and operator.

On 30 June 2009, Mr S Iswaran, then Senior Minister of State for Trade & Industry and Education announced that the Government would take over the development and ownership of the Singapore LNG terminal, as it was difficult to proceed with the project on a commercial basis. EMA subsequently formed a new company, Singapore LNG Corporation Pte Ltd (SLNG), to own the terminal and oversee its development.

On 21 January 2011, SLNG announced the award of the contract for the EPC of the third LNG storage tank to Samsung. The third 180,000 cubic metre LNG tank, in addition to the two similar-sized tanks that were being built, would increase the terminal’s storage capacity to handle up to 6 Mtpa of throughput. This addition gives Singapore greater flexibility not just to meet its future gas needs, but also to pursue new business opportunities in the LNG market.

On 4 August 2011, SLNG announced the award of the EPC contract for the Secondary Berth Project to Samsung. The project, which forms part of the S$1.7 billion overall Singapore LNG terminal project cost, comprises a secondary jetty designed to berth LNG ships with a cargo capacity ranging from 60,000 to 265,000 cubic metres (m3), and a tertiary jetty marine sub-structure designed for the future berthing of smaller LNG ships and barges with cargo capacity ranging from 10,000 m3 to 40,000 m3. The Secondary Berth Project will give added flexibility and value to the range of LNG terminal services that SLNG can offer its customers in Singapore and regionally.

On 24 October 2012, Mr S Iswaran, Minister in Prime Minister’s Office and Second Minister for Home Affairs & Trade and Industry, announced the plan to build a fourth LNG tank and associated facilities to boost the capacity of the LNG terminal to about 9 Mtpa. This is to ensure that the infrastructure can cater to Singapore’s future energy needs.

On 29 October 2012, the Front End Engineering Design (FEED) project to define the scope of the expansion of the LNG Terminal’s send-out and storage capacities, kicked off. The expansion plans include the installation of additional facilities to increase the Terminal’s capacity to 9 million tonnes per annum (Mtpa), and the construction of a fourth tank.

On 7 May 2013, the LNG terminal received its first commercial cargo, hence marking the terminal’s commencement of commercial operations.